Many of you may have spent a lot of time in the past few weeks playing games with your children or grandchildren.  Or perhaps some of you are kids at heart and received some of your own games during the holidays.  Many of these games were probably electronic PlayStation, Xbox or Wii games.  But what about the good old fashioned board games.

Well, here’s a board game for those of you that are ready to get down to the essential  game of getting a GSA schedule contract in 2012.  TurboGSA has released “The GSA Schedule Game,” which is downloadable from TurboGSA.   Batteries and dice not included! And while it is not an electronic game, it does have many links to useful resources on the web. Just scroll over the different squares and uncover useful links. 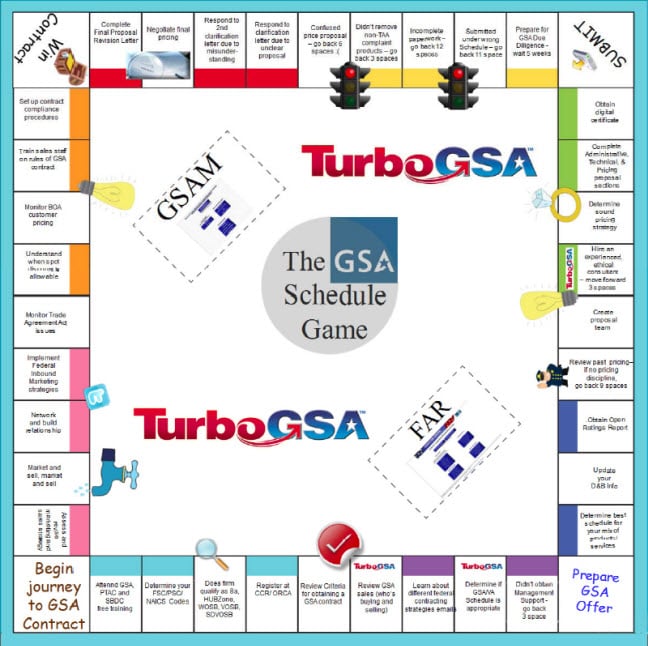 The GSA Schedule Game is a lighthearted look at the steps needed to obtain a GSA contract and gain some traction in the Federal market.  Starting in the lower left corner, you begin your journey by receiving some free training about GSA Schedules, registering at various government web sites like CCR and ORCA, and reviewing criteria to see if a GSA contract makes sense for your firm.  Once you decide a GSA Schedule makes sense, you turn the corner and begin preparing your GSA proposal.  Preparing a GSA proposal can be complex, but the game provides several ideas for your consideration.

The games also point out some of the pitfalls likely to be encountered. For example, if your pricing proposal is incomplete, or you did not pay attention to trade agreement act restrictions, you risk rejection and moving back 12 spaces.  The game concludes by identifying some of the basic steps to take after you are awarded your GSA contract number.

The GSA Schedule Game was prepared by TurboGSA, a premier GSA Schedule services firm for many years.  It is intended to provide some useful tips to firms that are considering getting a GSA schedule contract.  It is by no means exhaustive in portraying all the actions a firm must take to obtain a GSA contract, nor all the potential pitfalls, but hopefully it will be helpful to you in understanding some of the  key steps in your journey to obtain a GSA Schedule contract. It also is a great way to brief your associates about the process of winning a GSA contract and succeeding in generating government contracts.